Blackbird Crowned is now out! 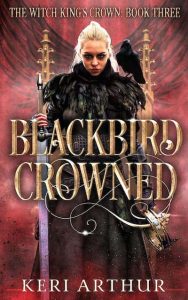 Blackbird Crowned, the final book in the Witch King’s Crown series is out now in both e-book and print. Woot!

Gwen De Montfort’s greatest fears have now come true. Her brother Max has not only claimed the sword in the stone, but is working with Darkside in order to destroy the royal family and claim the throne for himself.

But does he hold the true Witch King’s Sword? Or is the sword he drew a powerful fake?

With the attacks on them intensifying, Gwen, her grandmother Moscelyne, and Luc Durant—a sword-bearing warrior from an ancient order of knights—race to not only uncover the truth but find a means of stopping Max before his plans can come to bloody fruition.

As an old goddess’s prophecies come true and new powers rise, the dark gates are opened and London comes under attack.

But the final battle will not be for the throne or the crown but rather a life, and might well result in Gwen having to make the ultimate sacrifice.