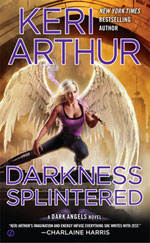 But only because I have a couple of books out. As I’ve said before, if you really want to know what’s going on in my writing world, then check out either my Facebook or Twitter page. I’m also on Google+, but I’m woeful at posting there, as well. The brain just can’t handle too many distractions–not if I actually want to get some writing done. Lol

There’s two. First up, we have Darkness Splintered, the 2nd last novel in the Dark Angels series. And, as i said on the website’s front page, it’s been getting some smashing reviews. Here’s a couple more:

Happily Ever After Reads said:Darkness Splintered raises the stakes in Risa life by putting her friends front and center and now not only her life is dependent upon her finding the keys but her friends lives as well. Risa, Azriel and the rest of the supporting characters (especially the brief moments we get with Riley, Quinn and Rhoan) continue to drive a series that’s captivating and hard to put down.

Ann from Under the Covers Book Blog said: I don’t want to go too deep into the plot to save you from spoilers but if you’ve read this series thus far, trust me. You don’t want to stop here. Arthur really knows what she is doing and DARKNESS SPLINTERED just might be the best in the series! 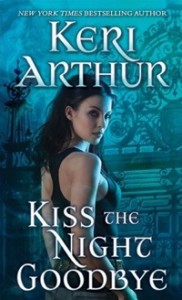 The second book just out is actually a re-release– Kiss the Night Goodbye, the 4th book in the Nikki & Micheal series. If you didn’t catch it the first time around (as a trade paperback through ImaJinn) then here’s your chance to grab it in mass market paperback. It’s also been grabbing some good reviews:

Anne from Under the Covers Book Blog said: I said this once before, but I adore Arthur’s writing in this series. It’s so eloquent, so detailed, so spot-on in its pacing that it just makes the reading experience so much more enjoyable. It reminds me a little of Nalini Singh’s writing where the characters are lovable, but have a mysterious aura about them. The action scenes spare no emotions as they go from interesting to intense in just a few words.

Stephanie from Feeling Fictional said: I really enjoyed the other books in this series and Kiss the Night Goodbye didn’t disappoint. If anything this last book in the series was even more action packed and there was still plenty of romance despite Michael’s memory loss. I love the growth we have seen in both of the characters throughout the series and although Keri Arthur has tied up the ends of the series well I would love it if she would bring out more adventures with Nikki and Michael in the future. I almost didn’t want to finish the book as I wasn’t ready for their story to end. I’d definitely recommend the series & I know it is one I’ll be reading again in the future.