So, we finally reach the main reason for this trip, the RWA conference. I love these conferences, but not so much for the workshops and the panels, but for the opportunity they give to catch up with editors, agents, and writing buddies that you talk to so often on line but only ever see at these sorts of events maybe once a year.

And basically, that’s what this conference was all about for me. I went to lunch with my bantam editor, I met and lunched with my NAL editor, I went to publisher cocktail parties, I caught up with my agent (quite a few times!) to plan future events, and I caught up with friends I don’t see often enough thanks to the distance between us. And it was fab.

One of the few workshops I did attend was a PAN session on The Numbers, with Madeline Hunter and Sabrina Jeffries. They made an interesting point during the session, and that was–everyone keeps pointing to what happened in the music industry as a guide to what’s going to happen in the print, but the digital sales in the music industry–after the initial years of turmoil–has even out at 50/50. That is, 50% digital, 50% CD. And the majority of the digital is singles rather than full Cds (something that can’t happen in the book industry–you can hardly buy just one or two chapters of a book! Although, maybe you can–a try a sample before you buy the whole deal sort of thing.) Both women believe publishing will eventually settle to similar figures, and that’s something I also believe (let’s put it this way–I don’t think print is going to disappear totally.

I do think print books will get a lot more expensive, simply because there will be less demand). I think the main problem at the moment is that e-publishing is creating such a huge buzz that everyone forgets print publishing still holds 70% of the market. Also, publishing has gone through this sort of turmoil before–when the mass market paperback came out, everyone predicted it would be the end of the hardcover, but that just wasn’t the case. Publishers may be slow to catch on, but catch on they will, and I think you’ll find that over the next few years, they’ll step more fully into the e-arena, while still maintaining a profitable print presence.

I didn’t take any pics during the conference, so here’s some pics from the July 4th fireworks celebrations. As you’ll see from these, we were down on the docks, right in front of the Intrepid. It was the perfect spot 🙂 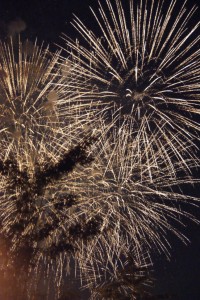 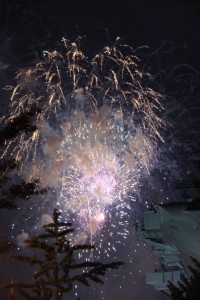 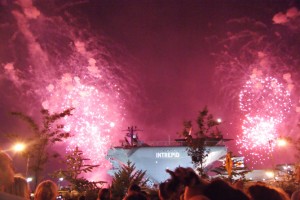 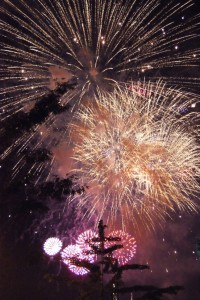 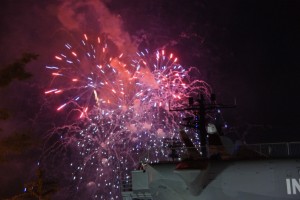