Today was our first day in Ireland, and to celebrate, the weather gods bought rain. Lots and lots of rain. Soaked to the skin type rain. Needless to say, not a lot of photos were taken, because I just couldn’t risk getting moisture in either camera. It was a shame, because Dublin had some fantastic old buildings.

Our first stop of the day was was Ireland’s Trinity College (not connected in any way to the other one in the UK). The book of Kells is held here, as well as lots of other medieval (and earlier) texts, so naturally enough, no photos were allowed inside. Trinity also has a hard cover copy of every book published over the years (though I bet they haven’t mine!) and walking into that room is simply amazing. Two stories, almost as long as the eye can see, with row upon row of shelves filled with leather backed books. I even saw several first edition Kipling books (one a comic!). You could smell the age and the leather and the old paper in the air—it was amazing.

This is the courtyard of Trinity college. The Book of Kells and the library are in the building you can see; 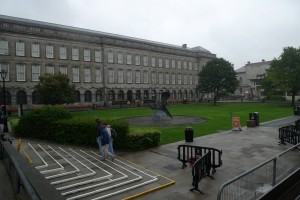 Our next stop was one for the boys—a visit to the Guinness factory. All I can say is, you’ve seen one beer factory, you’ve seen them all. I did try some Guinness (they were giving away free samples, which is no doubt why there were lots of people here), and all I can say is, bitter! (not that I’m a beer fan at any time). Though there were no photo restrictions here, I only took one—this is the wall of bottles they had to show all the different containers Guinness has come in: 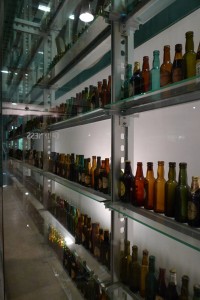 After that, it was free time, so we rugged up, braved the rain, and did a walking tour of Dublin. First stop was Dublin castle. You could do a full tour of the castle, but it took 40 minutes and we wanted to see as much as we could in the brief time we had. So that’s on the list for our return to Dublin next Sunday, and we simply checked out the chapel and outside areas: 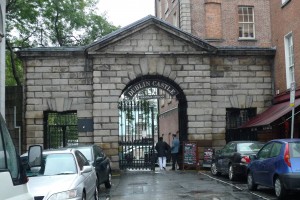 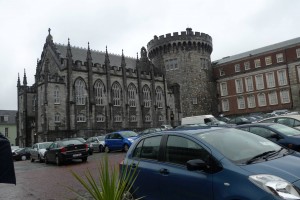 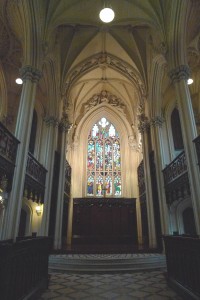 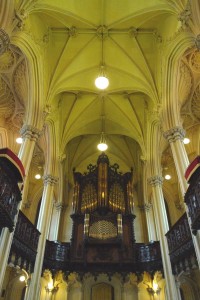 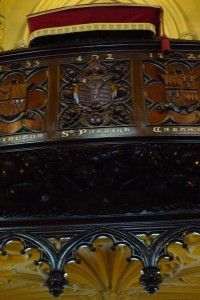 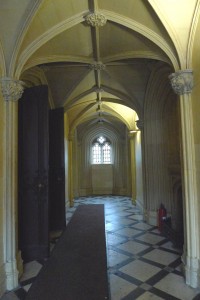 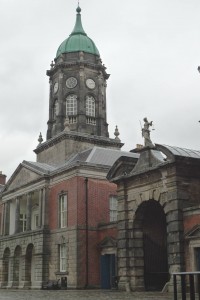 Then we trudged along to Christ Church Cathedral, expecting just ABC, but finding something totally inspiring—and crypts! 🙂 Unfortunately, I have no pics of them on this camera, but they were very atmospheric. We even had afternoon tea down there (and went to the loo!) Here’s the few pics I do have:

the outside of the church, and the ancient remains of a medieval house (I think it was a priests house or something) 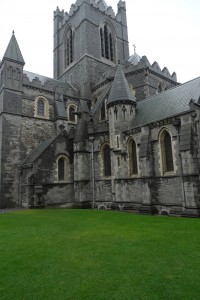 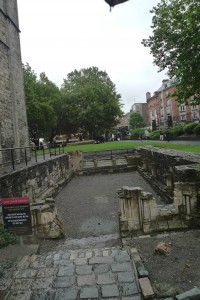 some pics from the inside of the church (the 1st two are entrance pics): 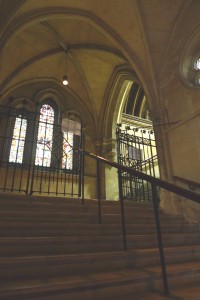 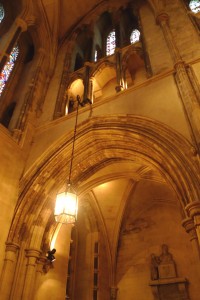 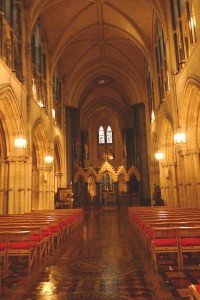 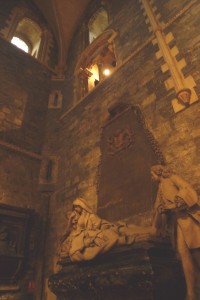 They also had a couple of examples of Tudor clothing here (can’t remember why, but I took some pics of them) 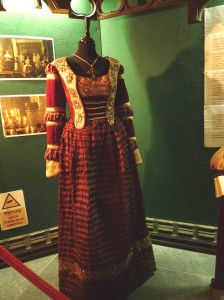 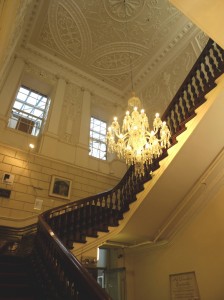 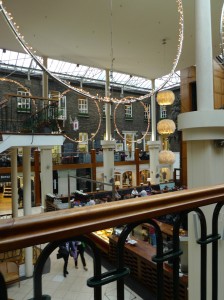 Then it was on to dinner at a fab Irish pub, and a night of listening and singing to Irish music! Heaven itself 🙂

Tomorrow we move on from Dublin to Galway. (BTW, if you don’t believe me about the rain, I just heard that we’ve had 100mm over the last 24 hours. Which makes us Melburnians feel right at home, but really, some sunshine would be nice!)