Sorry for the lack of updates, but getting internet access in this part of the UK is proving more difficult than I thought it would be. As a result, I’m several days behind, but I will try to catch up. On to the tales of day 3….

A full day of touring, some mayhem and misdirection, and a hotel that reminded me so much of Faulty Towers that I expected John Cleese to come walzing around a corner pretty much sums up the day.

The day started with a journey to the town of Penzance, which, despite its name, has nothing to do with the opera or pirates. It ‘s located in Mounts Bay, and is famous for the nearby St Micheal’s Mount, which is a tiny rocky island which is linked to the mainland by a causeway that is only usable for 4 hours during low tide. Penzance itself is a pretty town, full of steps, cute shops and quite a few rather large seagulls. 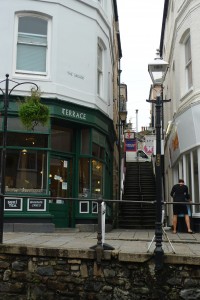 Here’s one of the many laneways 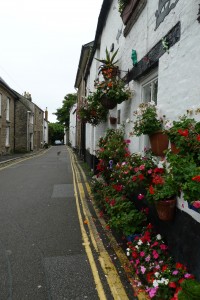 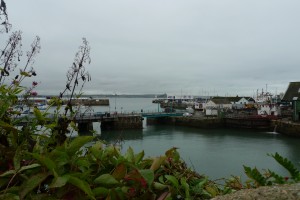 Then it was on to St. Micheal’s mount itself. There’s been a monastry and castle on this island since the sixth century, but it’s been the traditional home for one family for over 300 years. They still live there today. Here’s a pic of of the castle: 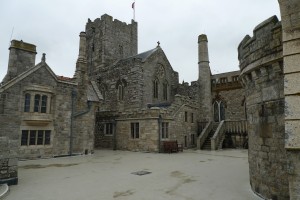 Inside the castle church. Apparently they found a 7 foot skeleton of a man here, but have no idea who he was, why he was there, or where the hell a 7 foot man came from in a time when people were traditionally much shorter : 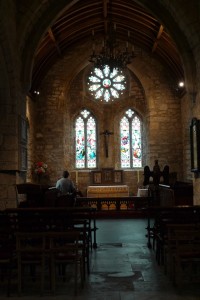 As I said, the family does still live here, so there were many parts of the castle we had no access to. But here’s one of the few we did see: 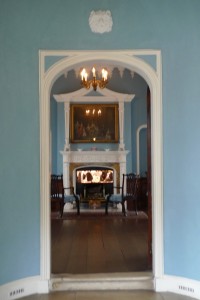 Then it was on to Truro and a ferry across to Trelissick, which according to the brochures is one of the finest gardens in England. I can’t actually say whether I agree with this, as we never actually got there. The ferry guy forgot to stop and let us off, and we ended up on a place called Falmouth—a pretty large fishing town half an hour away from Trelissick. Of course, the bus was meeting us at Trelissick, not Falmouth, and it was peak hour by then and the traffic was horrible. We passed the time strolling around, and were totally entertained for a good 15 minutes watching a double decker bus trying to get through a gap that no double decker was ever intended to get through—not when there were cars parked on either side of the road. In the end, several rather large and burly men walked around to the problematic car, and bounced/lifted it out of the way.

Here’s a pic of me in Falmouth 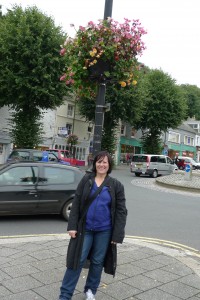 And here’s some of the shops: 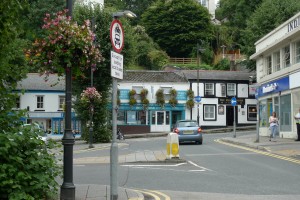 And here’s the afore mentioned bus, You can see just how close he is to the car. You can’t see the traffic in this one, but cars were queued up for miles 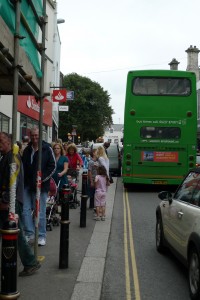 And finally, here’s a couple of evening pics of the Pollurion Hotel, the Faulty Towers hotel of Cornwell: 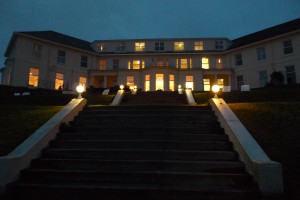 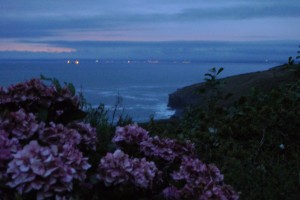 Tomorrow we’re off to the Cotswolds!