Day 2 of our journey started off so warm and sunny….NOT. It rained. Then it rained some more. And then later in the day, just for good measure, the weather gods threw in a pea souper fog. So of course, it’s wet, it’s slippery, and you can guess what I did. Yep, fell over and cracked my head on a concrete step. Clumsy, thy name is Keri. lol.

But I’m getting ahead of myself. We left Bath at the rather decent hour of 9, but weren’t really looking forward to the 4 hour bus journey to our first destination in Cornwell—Fowey. And it was so damn wet it was hard to see anything out the windows. But I can now understand why, in all the British lifestyle programs (location location, relocation, escape to the country etc) it can take hours to traverse what might appear to us to be a relatively short distance. It’s roads and events like this: 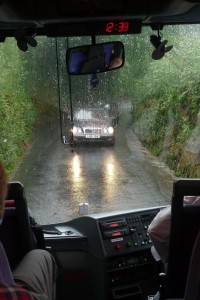 And because it’s summer holidays here, it was inevitable that we’d hit a caravan on such a road. There was, quite literally, less than an inch between us and the van. 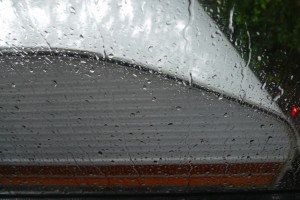 Of course, no one can move over any further, because while the hedgerows on either side look pretty, they conceal rather massive and immovable Cornish stone walls.

Thanks to the brilliance of our bus driver, we did eventually make it to Fowey. It was a town I would have liked to have seen more of, because it was very pretty, but it was so damn wet it just about made sightseeing impossible. It’s also the place where I fell over, and ended up with a bump the size of an egg on the back of my head. I did manage to get some pics though:

This one is of the Fowey harbour: 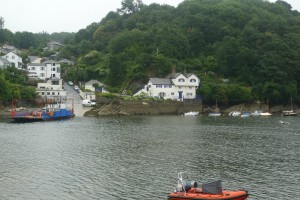 This one of the the local church: 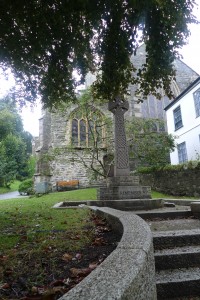 Here’s one of the pretty Fowey houses: 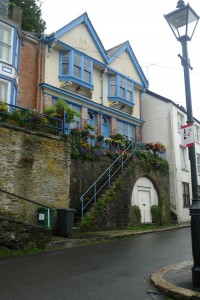 From Fowey, we moved on to the seaside town of Charlestown. Again, another extremely pretty town, but given it was right on the edge of the ocean, a freezing cold gale was added to the rain and it made life bloody unpleasant. I didn’t get many shots here—I was worried about water damage to the cameras.

Here’s a pic of the tall ships anchored here: 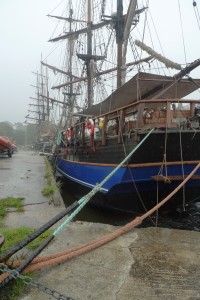 And here’s a pic of some Charlestown houses taken from down at the harbour: 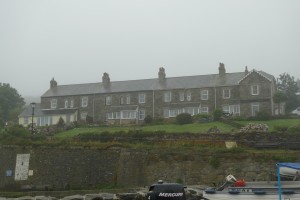 I spent most of our time in Charlestown inside the pub drinking a sinfully large hot chocolate 🙂 From Charlestown we continued on to our final destination for the day—Mullion. And the narrow streets really came into their own in this place. Check this out: 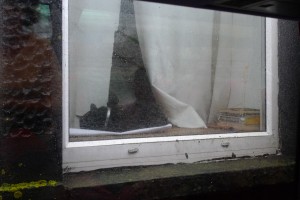 Yes, that’s a cat sleeping in a window sill that is less than an inch away from the side of the bus. Even getting into the driveway of our hotel – the Pollurion – was a major event. No wonder the bus driver need several large beers at dinner time!

But the hotel itself is stunning. We’re right on the edge of a cliff, and our rooms overlook the ocean: 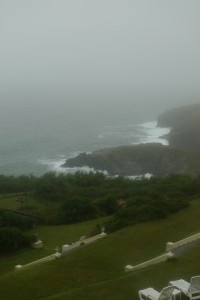 It’s an early start tomorrow—we’ve got to be on the bus by eight. Fingers crossed we get better weather!